Are These The Best Blockchain Stocks To Invest In Today?

Blockchain stocks are an increasingly popular section of the stock market today. As stocks continue to soar towards greater heights, it would not surprise me to see investors eyeing the sector now. By and large, the main pull of the industry now would be its connection to Bitcoin, the leading cryptocurrency on the market. Thanks to recent regulatory developments regarding digital currency, blockchain tech seems to be back in the limelight.

Ever since the launch of the Bitcoin futures ETF, Bitcoin among other crypto giants are looking at solid gains. In fact, Bitcoin continues to hold above the $60,000 mark even after two weeks. As you can imagine, the regulatory green light would help to build optimism in some investors regarding the viability of blockchain tech. At the same time, companies that focus on blockchain-related markets remain hard at work as well.

Last week, news broke of Coinbase Global’s (NASDAQ: COIN) plans for a subscription service. The leading cryptocurrency exchange platform manager is testing a service offering reduced trading fees for monthly subscribers. Should things go as planned, such an offering could serve to further incentivize crypto trading among its clients. Similarly, fintech titans such as Square (NYSE: SQ) and PayPal (NASDAQ: PYPL) are also providing more crypto-related offerings. All in all, blockchain is becoming more available by the day. With that in mind, could one of these blockchain stocks be worth watching in the stock market now?

Top Blockchain Stocks To Buy [Or Sell] In November 2021

First up, we have MicroStrategy, a blockchain company that provides business intelligence, mobile software, and cloud-based services. It also has a leading enterprise analytics platform that provides modern analytics on an open, comprehensive enterprise platform used by many of the world’s most admired brands in the Fortune Global 500. MSTR stock is up by over 300% in the past year alone.

On October 28, 2021, the company announced its third-quarter financials. Firstly, it reported that total revenues for the quarter were $128 million. Gross profit for the quarter was $105.7 million, representing an 82.6% gross margin. The company also ended the quarter with $57 million in cash and cash equivalents. MicroStrategy also says that it ended the quarter with digital assets of $2.41 billion, with approximately 114,042 bitcoins. It says that overall demand for the MicroStrategy platform continued to increase and it is pleased with the growing interest and adoption of its cloud solutions.

In October, the company also announced that it has achieved the Federal Risk and Authorization Management Program’s (FedRAMP) “In Process” Designation. Full authorization and certification under FedRAMP is expected before September 2022. FedRAMP provides a standardized approach to security and data protection for cloud-based solutions offered to federal government agencies. It establishes the essential benchmarks used by U.S. federal agencies to ensure the confidentiality, integrity, and availability of sensitive and vital information. Earning this designation would be a natural next step for MicroStrategy’s rapidly growing Federal business. Given this piece of news, should you invest in MSTR stock?

Riot Blockchain is a Bitcoin mining company that is rapidly expanding its large-scale mining in the U.S. It focuses on increasing its Bitcoin mining hash rate and infrastructure capacity with high efficiency. The company’s current hash rate is 2.8 EH/S and it currently has deployed approximately 27,270 miners.

Also, the company recently completed a $54 million purchase order with Bitmain Technologies Limited for 9,000 S19j Pro (100 TH/s) miners, with an anticipated delivery and deployment schedule set for May 2022 through October 2022. As a result of this purchase order, the company’s 2022 estimated hash rate capacity will be 8.6 EH/s. With that being said, should investors be looking out closely for RIOT stock right now? 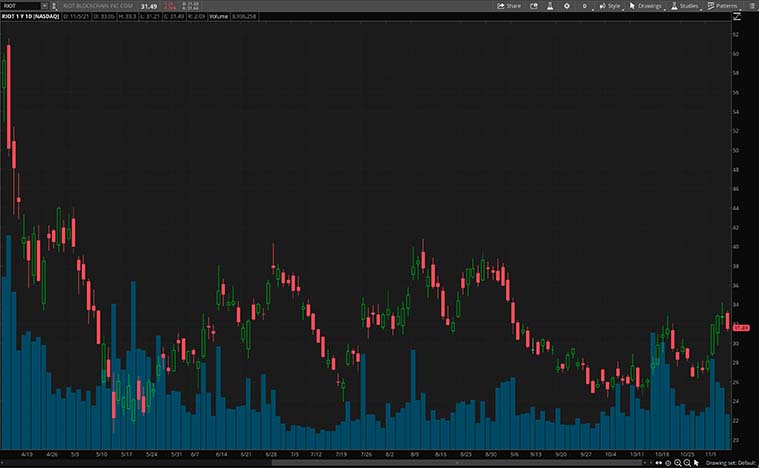 Last but not least, we have Marathon Digital Holdings, or MARA for short. In brief, MARA is a Nevada-based tech firm that primarily focuses on mining cryptocurrencies. Notably, it is actively working towards building the largest mining operation in North America with one of the lowest energy costs. As with most Bitcoin mining firms, MARA stock is another option for investors looking to bet on blockchain tech now.

On November 2, 2021, the company also announced its bitcoin production and mining operation updates for October 2021. It produced 417.7 self-minted bitcoins in October, increasing its total bitcoin holdings to approximately 7,453 with a fair market value of approximately $457.4 million. It also ended the quarter with $20.9 million in cash.

Also, it has received approximately 42,381 top-tier ASIC miners from Bitmain year-to-date with 12,331 delivered to a Compute North facility with an additional 3,285 ASIC miners currently in transit. The company says that it has also begun chartering planes in October to mitigate the impact of global logistics issues and to ensure that shipments of its new miners occur in a timely manner. In light of that, it will expect to accelerate the shipments of its previously purchased miners in the coming months. This would allow its bitcoin production to become more consistent with scale. All things considered, will you buy MARA stock? 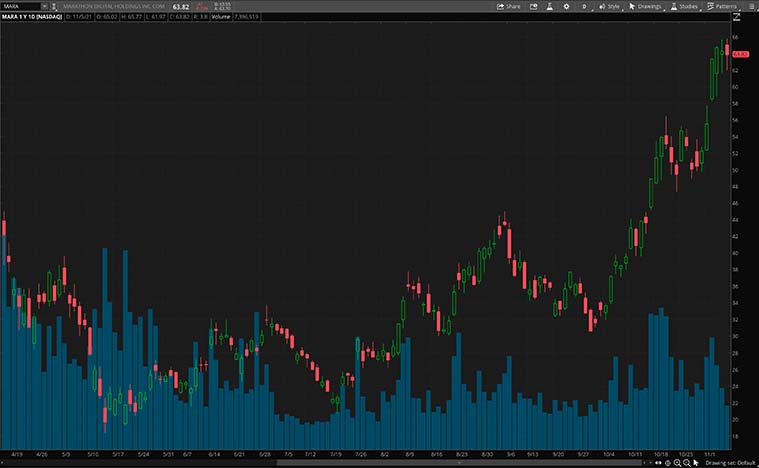