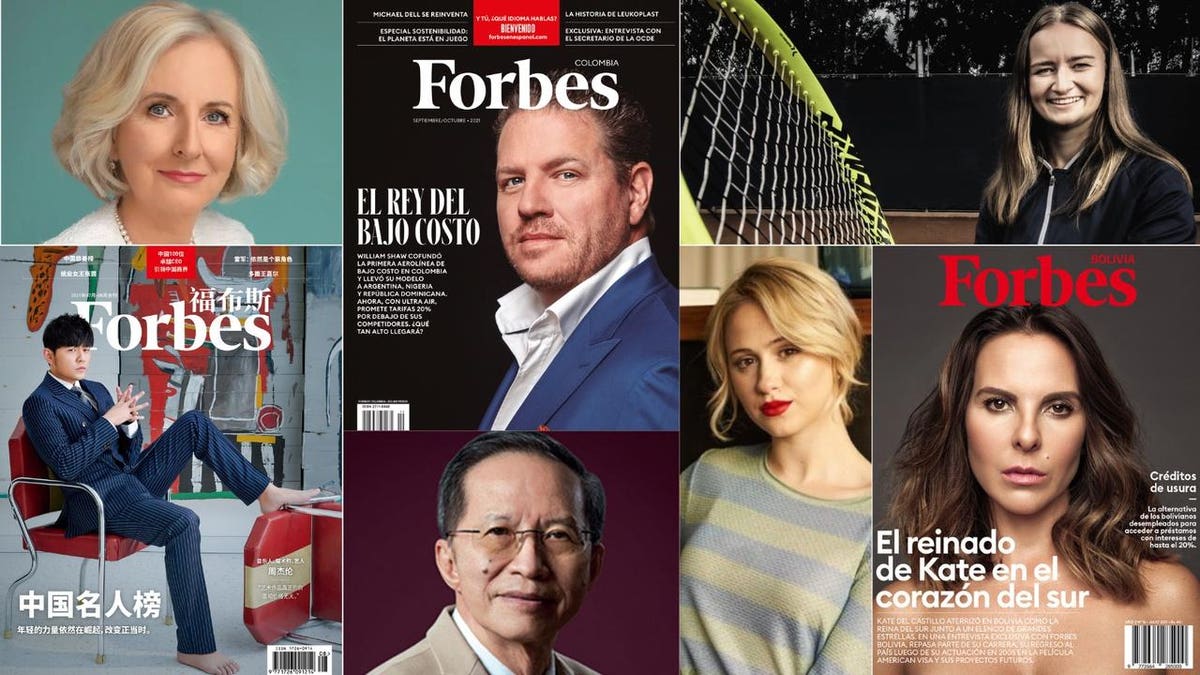 This story appears in the October/November 2021 issue of Forbes Magazine. Subscribe

Across the planet, the licensed editions of Forbes magazine span five continents, 25 languages and 13 time zones. They all share the same mission: celebrating entrepreneurial capitalism in all its forms. Here’s a global perspective on the business landscape in real time.

Mexican actress Kate del Castillo makes the cover of Forbes Bolivia for her work in La Paz this summer, shooting season three of La Reina del Sur, a Netflix telenovela in which she plays the leader of a drug cartel.

Brazilian fashion brand PatBO, already carried in tony retail stores including Saks and Bergdorf Goodman in 25 countries, opened a location in Manhattan’s Soho in September, in addition to its flagship in São Paulo. Dresses start at about $600.

Maria Bakalova beat out over 500 rivals for the role of Tutar in the 2020 mockumentary Borat Subsequent Moviefilm. Fresh off an Oscar nomination for Best Supporting Actress and other laurels, she’s now getting involved in film production to carve out more opportunities in Hollywood for Eastern European talent.

The coronavirus nearly shut down Cape Verde tourism and ruined its hopes of welcoming 1 million visitors this year. Halfway through 2021, only about 34,000 travelers had arrived on the archipelago, compared to 819,000 in all of 2019.

William Shaw, whom Forbes Colombia calls “the king of low cost,” has founded or backed five discount airlines around the world. Most recently, he raised $10 million for Ultra Air, a Medellín carrier to rival VivaColombia, which Shaw started in 2009 and later sold.

Positioning itself as a wedding destination, Cyprus has felt the effects of the pandemic as most couples postponed their overseas nuptials until 2022 or 2023. Ceremony planners and vendors have taken a hit, but local entrepreneur Maria Evripides of BookYourWeddingDay.com predicts long-term bliss for the nation’s wedding sector.

Tennis star Barbora Krejčíková, 25, earned $2.7 million in the past year, enough for her to rank No. 17 (and the only woman) among the 25 highest-paid Czech athletes.

The inaugural issue of Forbes Ecuador features Guillermo Lasso, the wealthy banker who became president in May and made vaccination priority No. 1. In his first 100 days, 52% of the country’s 17 million people received Covid-19 jabs.

At 17, Jude Benhalim started making rings, earrings, necklaces and bracelets, and would sell them on Instagram and Facebook. Ten years later, Chrissy Teigen and Kendall Jenner have both worn her jewelry, and her eponymous brand is opening its second store in the Cairo area.

Agrisal Group, among the Latin American companies that made the largest capital investments in the region in the past two years, opened a $60 million shopping mall in Apopa in late 2020 and is scheduled to open a San Salvador Hilton hotel in 2023.

In April, Audrey Tcherkoff became head of the Women’s Forum, a Paris-based think tank with a network of 49,000 advocates for gender equality in business and policy decision making.

A special issue of Forbes Georgia focuses on infrastructure. The cover portrays the Rikoti Pass project, which has a budget of up to $830 million to develop roads, bridges and tunnels for faster passage through the mountains that divide the country into its east and west halves.

Forbes Greece includes Taxibeat on a list of the country’s great “started from scratch” success stories. Frustration over trying to hail a cab inspired the Athens ride-sharing service, which German carmaker Daimler acquired for $43 million in 2017. Renamed Beat, it has since expanded across South America.

Based in California and counting partnerships with Apple and China’s Dangdang, self-publishing platform PublishDrive features authors and books in more than 100 countries and 65 languages. “We designed for the global market from day one,” says Hungarian CEO and cofounder Kinga Jentetics, 34.

Of the 26 Indian companies that passed $1 billion in valuation this year as of mid-August, among the most valuable are edtech UpGrad and online pharmacy PharmEasy, each worth more than $3 billion.

The Jakarta-based co-CEOs of Lemonilo have completed a Series B round led by Sequoia Capital India, reportedly valuing the online marketplace of natural food and skincare products at roughly $300 million.

Forbes Israel’s Best Doctors list spotlights psychiatrists studying the impact of the coronavirus on the brain. It appears to be causing some patients to develop sleep and anxiety disorders. “They do not have virus in the body, but they are left with the residue,” says Gil Zalsman of Tel Aviv University.

“The concept of sports business can be expanded,” says Shingo Okamura, CEO of Tokyo entertainment firm DeNA. In the past 10 years, he has lifted the money-losing Yokohama BayStars baseball team to profitability by drawing in first-time fans through gimmicks and stadium-adjacent attractions.

Forbes Kazakhstan’s 30 Under 30 issue features BIP House, a group of TikTok stars who live together in Almaty, count about 18 million followers across social media and post video challenges like crushing a water bottle while drinking from it.

Within a decade, Dace Meldere increased her herd of 178 bovines into the 500-strong purebred beef cattle organic farm Kolumbi, which also grows grain and is located near the western Latvian town of Kuldīga. She features in Forbes Latvia’s list of top livestock farmers.

In four years, 24 tech startups in Latin America have become unicorns. Among them are Kavak, a Mexican platform to buy and sell used cars, and NotCo, a Chilean maker of plant-based food and drinks.

Having handed over the reins of her 30-year-old marketing agency to her son-in-law, 65-year-old Katarzyna Łakińska launched the website Flexi.pl for people over 50 looking for jobs, events or training opportunities.

In January, Portuguese triple jumper Patrícia Mamona, 32, fought a bout with Covid-19. Come March, she grabbed gold at the European Championships, followed by a silver at the Tokyo Olympics.

Tesla competitor Arrival went public via a SPAC in March, making Russian founder Denis Sverdlov, 43, a billionaire. The U.K. will begin testing its electric buses in the next few months.

The biggest residential developer in Slovakia, Cresco has an extensive portfolio that includes the U.S. ambassador’s home in Bratislava. Managing director Ján Krnáč explains how the pandemic is fueling the nation’s property prices.

Fronting Forbes Korea’s list of 100 Power YouTubers, Lia Kim has 1 million subscribers on her channel as chief choreographer at Seoul-based 1Million Dance Studio, which counts 24 million on its page.

Forbes Spain honors Francisco Reynés as Best CEO of 2020. He leads Naturgy, a publicly traded natural-gas company in Madrid that gave customers extra time to pay their bills during the pandemic and provided energy-efficiency training to hundreds of families.

Andy Yen quit his well-paid job at CERN, one of the most prestigious nuclear research institutions in the world, to help build ProtonMail, a secure and privacy-oriented email provider. Today, the seven-year-old Swiss startup boasts 50 million users worldwide.

MedPark, which Forbes Thailand calls the “vanguard of private hospitals,” opened in Bangkok last year. Managing director Pongpat Patanavanich says he expects the $230 million facility to be a Southeast Asian hub for specialized and complex care.

Ten years ago, Do Minh Phu sold his sanitary-pad business and invested in Hanoi’s TPBank. As chairman, he has since guided the then-small bank to a public listing and a spot on Forbes Vietnam’s new ranking of the country’s 25 most valuable finance brands. In the first half of this year, pretax profits reached $130 million.