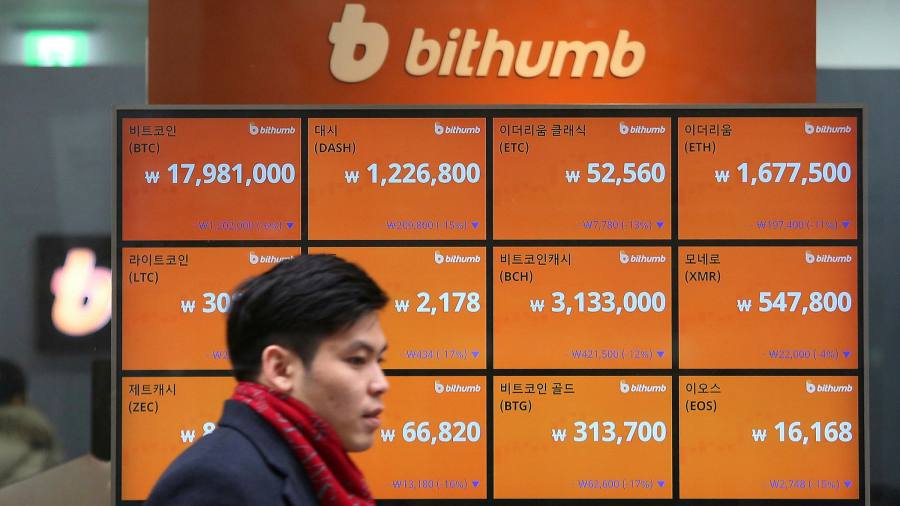 Sign up to myFT Daily Digest to be the first to know about Cryptocurrencies news.

South Korean cryptocurrency traders are bracing for losses of more than Won3tn ($2.6bn) as two-thirds of the country’s crypto exchanges are set to be wiped out in a regulatory overhaul of one of the world’s biggest digital currency markets.

The Financial Services Commission, South Korea’s financial watchdog, has set a September 24 deadline for foreign and local exchanges to register as legal trading platforms, part of an effort to tighten oversight of the country’s exuberant crypto sector.

But most local exchanges are struggling to meet the conditions, with almost 40 of South Korea’s estimated 60 crypto operators expected to be shut down, according to industry insiders and regulators.

South Korea’s crypto trading is dominated by four big exchanges — Upbit, Bithumb, Korbit and Coinone — which account for more than 90 per cent of the country’s total trading volume.

The mass shutdown of smaller exchanges could also eliminate 42 so-called kimchi coins, alternative digital currencies that are listed on local exchanges and traded mostly in Korean won, according to estimates by Kim Hyoung-joong, a professor and head of the Cryptocurrency Research Center at Korea University.

Industry data showed that digital coins other than bitcoin made up about 90 per cent of South Korean crypto trading, highlighting the market’s highly speculative nature.

“A situation similar to a bank run is expected near the deadline as investors can’t cash out of their holdings of ‘alt-coins’ listed only on small exchanges,” said Lee Chul-yi, head of Foblgate, a mid-sized exchange. “They will find themselves suddenly poor. I wonder if regulators can handle the side-effects.”

The FSC has advised exchanges that will fail to meet regulatory conditions to notify their customers of any possible closure by Friday, September 17.

To be licensed as a legal trading platform, South Korean crypto exchanges must partner with local banks to open real-name bank accounts for customers. But local lenders have resisted doing so over fears of being exposed to money laundering and other financial crimes.

About 20 exchanges have met some of the regulatory conditions by establishing security systems for personal information and will be allowed to offer crypto-to-crypto trading services. But industry watchers said the operators would still struggle for survival, given the limited size of their business.

“Huge investor losses are expected with trading suspended and assets frozen at many small exchanges as customer protection will not likely be the priority of those exchanges facing an imminent closure,” said Cho Yeon-haeng, president of Korea Finance Consumer Federation.

The regulations will also affect global exchanges offering won trading. The FSC has sent a notice to 27 foreign crypto exchanges that run operations for Korean traders.

Binance, the world’s biggest crypto exchange, last month suspended its won-to-crypto trading service in order to “proactively comply with local regulations”, the first such move from a large overseas operator.

The Korean won is the third most widely used currency for bitcoin trading, after the dollar and euro, accounting for about 5 per cent of global trading, according to data from Coinhills.

Regulators hope the overhaul will damp the crypto frenzy in South Korea. Many young South Koreans — who face high unemployment and surging housing prices — have remained enthusiastic buyers of digital assets, despite the currencies’ volatility.

Bitcoin has experienced a roller-coaster ride this year, surging to more than $60,000 in April before plummeting to less than $30,000 in June.

It has since rebounded to about $46,000, driven by risky bets by developing countries including El Salvador’s pioneering adoption of the digital currency as legal tender.

For the latest news and views on fintech from the FT’s network of correspondents around the world, sign up to our weekly newsletter #fintechFT