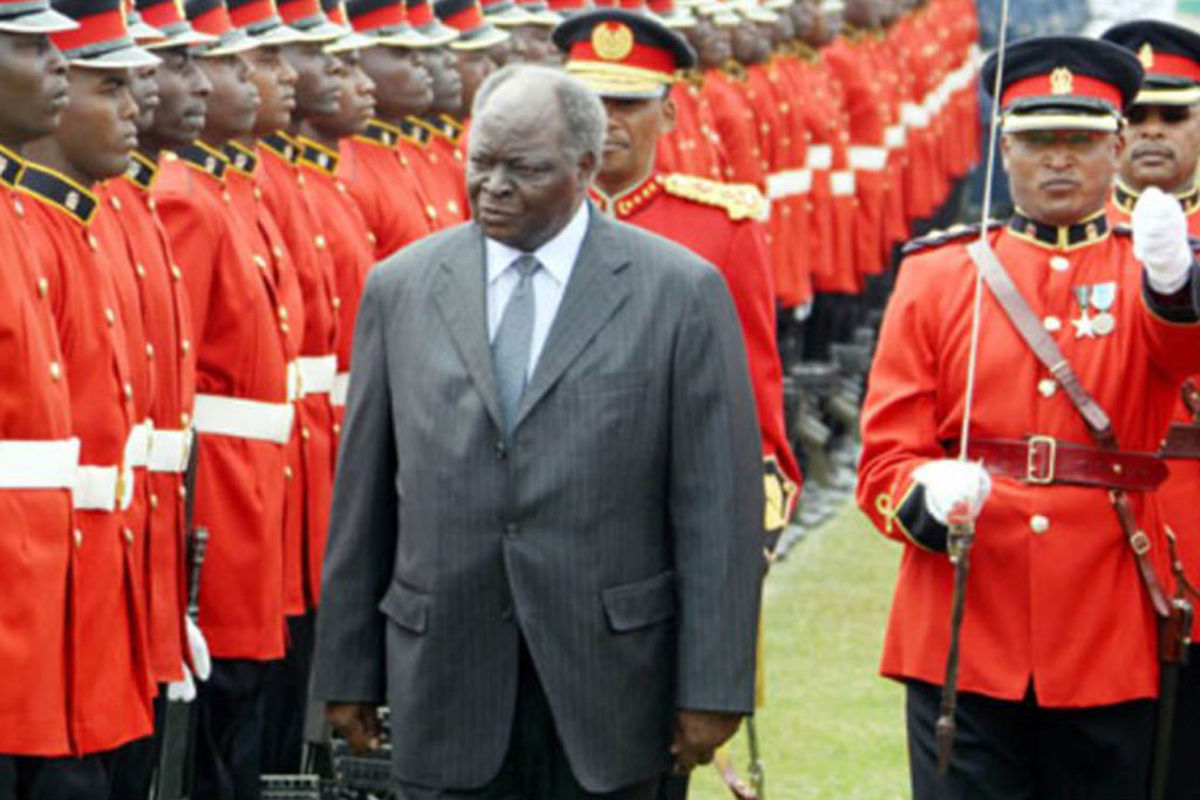 If there is one factor that eased Mwai Kibaki’s way to the presidency in 2002, it is that through a lifetime in political leadership he had no enduring enemies, bore no lasting grudges and was not seen to pose a threat to any competing politicians or interest groups.

His reputation as the gentleman of Kenyan politics dating back to his election as MP for Nairobi’s Donholm constituency at the pre-Independence General Election of 1963 served him well when it came to building alliances and partnerships.

When Mr Raila Odinga made his famous ‘Kibaki Tosha!’ declaration ahead of the 2002 elections, paving the way for near-unanimity on the Opposition presidential candidate to face off against outgoing President Daniel arap Moi’s handpicked Kanu flagbearer, Uhuru Kenyatta, it wasn’t for lack of alternatives.

Mr Odinga, the Opposition luminary who had gone into Kanu then led mass exodus in protest against the rookie Kenyatta’s nomination, had just had a meeting with former cabinet minister Simeon Nyachae, and indicated support for his presidential bid.

The ex-Kanu brigade also had no shortage of likely contenders for the presidency, the most notable being former vice president George Saitoti.

He settled on Kibaki because he saw in him not just the frontrunner at the head of an existing Opposition alliance, but a gentleman he could do business with in terms of a political relationship.

The two had been Opposition allies, but also for the most part on rival sides of the Opposition divide.
One thing many had come to appreciate is that though he spent most of his adult life in politics, Mr Kibaki consciously avoided the insults, name-calling and personalised attacks that are the norm in Kenya’s political competition.

But all too often his gentlemanly mien, natural caution and non-confrontational style earned him the tag of a coward, or fence sitter.

One key recommendation was that Mr Kibaki shed his soft approach and go for the jugular against president Moi.
In that campaign the Democratic Party candidate upped his attacks on the Kanu regime, with blistering assaults on failed economic policies, crumbling infrastructure, runaway corruption and promotion of ethnic conflict as a political tool. Mr Kibaki, however, drew the line against direct personal attacks on Moi.

That was vintage Kibaki. When he crossed the floor in forming the DP at the end of 1991 after having faithfully served the one-party Kanu regime, he had to endure sustained attacks from the Opposition luminaries who had sacrificed so much in the fight for democracy.

The forces allied to Ford Kenya leader Oginga Odinga dismissed him as an opportunist who waited for others to bear the brunt of the multi-party campaign, only to jump in to reap where he did not sow. The troops loyal to Ford Asili leader Kenneth Matiba, his rival for the central Kenya vote, baptised Mr Kibaki ‘General Kiguoya’ (Coward). He hardly ever hit back in kind, focusing his campaign messaging on policy proposals rather than personality attacks.

This is a stance that made Mr Kibaki widely acceptable across the board when it mattered. Thus when Mr Matiba dropped out of the picture at the 1997 elections, his fiercely loyal followers had no hesitation in joining the rival Kibaki camp. Ditto 2002 when Raila Odinga declared ‘Kibaki Tosha’. It was not just the Luo Nyanza base, but also the ex-Kanu loyalists who had waged war against Kibaki since the single-party era who trooped to his side almost to a man.

It was not by accident that the civil society luminaries, including future Chief Justice Willy Mutunga and present Makueni Governor Kivutha Kibwana, who were the brains behind the 2002 opposition alliance, early on identified in Kibaki most likely candidate to end Kanu’s 40-year monopoly of power.

Another little known fact around the 2002 campaign as that even as Moi picked Uhuru Kenyatta as his antidote—pick a Kikuyu to stop a Kikuyu—he had no particular antipathy towards a Kibaki presidency.

He knew that the Kanu tyro stood little chance of winning, but Moi considered Kibaki a perfectly acceptable alternative, a safe pair of hands who would not go into vengeful mood once in State House.

Indeed in the early months of the Kibaki presidency, some of the more excitable figures in the new government wanted to make life difficult for the former president by launching corruption investigations and seeking seizure of his properties.

It was Kibaki who firmly put a stop to him and directed that his predecessor be treated with respect. In the early days of his departure from office, Moi even started packing his bags to move out of the Kabarnet Gardens government residence in Nairobi he had occupied since his days as vice president. President Kibaki personally intervened to let Mr Moi continue his occupancy as part of the housing benefits a former president is entitled to.

Mr Kibaki’s gentleman reputation came not just from his performance on the political platform, but through an easygoing and genial personality in almost everything he did. As Finance minister under president Jomo Kenyatta and vice president and Leader of Government Business under president Moi, he distinguished as a masterful parliamentarian, expounding on policy and answering questions without reference to any notes, and always laced with a great sense of humour.

He had slowed down somewhat by the time he assumed the presidency in 2002, following a car accident in the final lap of the campaign and then a stroke that affected his faculties. But the vintage Kibaki was a masterful public speaker and debater, effortlessly speaking off-the-cuff on almost any topic whether on the floor of parliament, the public rostrum or the cocktail circuit.

He could be aloof and distant, but was also genuinely friendly and a great conversationist which enabled him to cultivate friends and allies across the board.

Before breathing his last on Friday morning, the former president had been in and out of Nairobi Hospital for various ailments, including blood pressure.

Some close family sources also said Kibaki was still battling the consequences of the road accident he was involved in 2002 ahead of the elections that thrust him into the leadership of the country.
Kibaki was sworn in while on a wheelchair following the accident, which had seen him flown to the United Kingdom for treatment.

The hospital visits had become frequent. Kibaki was rushed back to hospital when his condition deteriorated on Thursday morning.

Museveni (Uganda): He was active in deepening the roots of African unity and cooperation for peace, development and security. He will be remembered for his faithful and excellent service to his motherland and Africa.’’

Evariste Ndayi-shimiye (Burundi): It is with deep sorrow and sadness that I learnt of the passing of H.E. Mwai Kibaki. My deepest condolences to his family, to my brother Uhuru Kenyatta and to all the people of Kenya.

Samiah Suluhu (Tanzania): I’m deeply saddened by the passing on of the third President of Kenya, H.E Mwai Kibaki. Africa has lost one of its finest sons and a dedicated public servant.

Paul Kagame (Rwanda): President Kibaki’s  dedication to the economic transformation of Kenya and his work towards regional integration will be remembered for many generations.