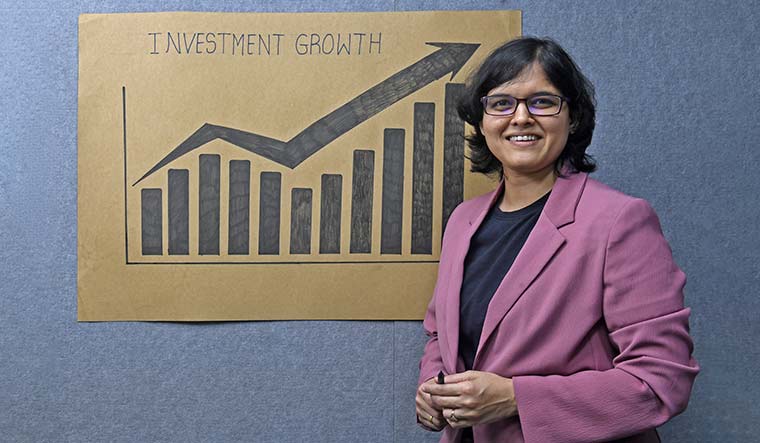 Pune-based Rachana Ranade always wanted to be a teacher. She cleared her chartered accountancy exam in 2008 and declined high-profile job offers from multinational corporations to start teaching. As recently as 2019, she was teaching MBA and CA students. At one point, she was a visiting faculty in as many as seven colleges. Today, Ranade is a YouTube star, dishing out information on all things finance—from basics of the stock market to futures and options trading for beginners and analysis of initial public offerings.

“Other than CA and MBA, the stock market was one area I loved,” she said. “I have been investing in stocks since 2006. My husband and brother also used to always talk about stocks. So, that is what got me interested and I slowly started learning. Once a group of CA students approached me to take a class on stock markets. While conducting a class for a small batch, I realised that the stock market was a subject that could be taught.”

As more students got interested in her lectures on stock markets, people started demanding recorded lectures. The first lecture that Ranade uploaded on YouTube was a lengthy 90 minutes. It still got 25,000 views in three months. That proved to be a game changer, she said. The lecture has since received over 10 million views and Ranade has left teaching to become a full-time financial influencer.

Hyderabad-based Prasad Lendwe’s interest in the stock market began when he was in college. While pursuing an engineering degree in Mumbai, he started following the stock market through a financial daily that his friend bought regularly. His interest piqued, he moved on to second-hand books and magazines. Initially, with his limited knowledge, he suffered huge losses in the market.

Rather than calling it quits, he learnt more about stocks and started working part-time to raise seed money for investing. To share the learnings from his mistakes, he posted a video on the basics of the stock market in 2014. The YouTube video got 14,000 views in around two months and continued to attract more. This led to requests for more such content and Lendwe started uploading videos every few months. Now, he is also a full-time financial influencer (commonly known as a finfluencer).

Locked down, investment up

When the pandemic led to lockdowns across the world, people seemingly found more time to look at the markets. Equity investing definitely grew in a big way. On October 25, the unique registered investors on the National Stock Exchange (NSE) crossed 50 million. The growth from 30 million to 40 million had taken 15 months. But, the next 10 million were added in just seven months, according to the NSE.

A record 14.2 million new demat accounts were opened in the year ended March 2021—over three times the 4.3 million accounts opened in the previous financial year. A large part of this growth was fuelled by discount brokerages like Zerodha, Upstox, Groww and 5Paisa. As more people have taken to direct stock market investing, their quest for information has also grown. This has led to skyrocketing views for finfluencer videos.

Ranade’s YouTube channel now has over 3.2 million subscribers. Raipur-based Pranjal Kamra’s YouTube channel on finance has over 3.3 million subscribers. Mukul Malik’s personal finance channel has touched 2.8 million. Lendwe’s channel has crossed 1.6 million. The underlying thing that has clicked is that all these influencers try to explain difficult topics in simple language that common people can understand.

“The amount of views that all good influencers are getting clearly shows that the younger generation, which has come into the market, wants to learn,” said Anant Ladha, the founder of Invest Aaj for Kal. “They are not just here to get so-called tips on what to buy and sell. During lockdown, people had time and wanted to learn something new. There has been a clear bifurcation between good and bad, and channels providing good educational content have exploded.”

Ladha, a chartered financial analyst and a certified financial planner, was doing offline financial advisory sessions. But, by doing these sessions for small groups, he felt that he can only ever reach one lakh to two lakh people. So, Ladha decided to tap into social media platforms and began uploading videos on YouTube. His channel now has over six lakh subscribers. Initially, his videos used to get 2,000 to 5,000 views. They now fetch 60,000 to 80,000, some even hit one lakh.

Chennai-based options trader P.R. Sundar, who also has a YouTube channel on stock markets, has seen similar growth. Sundar taught mathematics in Gujarat for around six years. Then, in 1994, he started teaching in Singapore. He returned in 2005 and, in 2007, started investing in stocks. His YouTube channel is under two years old. In April 2020, he had 20,000 subscribers. That has surged to around 7.8 lakh now—a growth of over 3,000 per cent in less than two years. His videos, on average, get around one lakh views.

As the clicks on videos uploaded on YouTube increase, so does the platform’s revenue. YouTube then shares this revenue with the content creators, based on the number of views. The YouTubers can also enable channel memberships. Members-only benefits vary—YouTubers usually explain these while asking viewers to become members.

Another revenue stream is sponsorships; videos by finfluencers is logical content for stock broking firms to sponsor. Several broking firms are reaching out to finfluencers. The partnership could be as simple as enabling links on a channel, which would direct a viewer to a demat account opening page on a broking firm’s website. Bhuvanesh R., a business analyst at discount broker Zerodha, said that the firm has an affiliate partner programme where partners get a share for bringing people to it. There could also be other benefits. For example, Sundar said that his YouTube videos had helped him attract more people to his workshops.

Ranade enabled paid memberships last year and YouTube’s CEO Susan Wojcicki mentioned in her official blog that it accounted for the majority of Ranade’s YouTube revenue, with around $100,000 (about 076 lakh) in less than a year. “This is just membership revenue,” said Ranade. “Then there are advertisements, brand deals and there are courses.” But, she is quick to add that while there is money to be made, one needs to have perseverance and stick to one’s schedule of uploading videos without fail. Ranade’s husband, who is also a CA, has recently quit his job and joined her full time. Ranade publishes videos twice a week and plans her upcoming videos weeks in advance after discussions with her team.

Sundar, who does market analysis daily, agreed there is a lot of hard work that goes into making a YouTube channel successful. He pointed out that even on vacations, he has had to make time and publish his videos through his phone.

Until a few years ago, people from states like Maharashtra and Gujarat and the metros elsewhere formed a major chunk of stock market and mutual fund investors. But, that is changing fast. Data from the Association of Mutual Funds of India shows that assets from B30 (cities beyond the top 30) touched 06.16 trillion in September 2021, compared with 04.47 trillion in September 2020—a 38 per cent year-on-year increase.

However, despite the surge in stock market investors and mutual fund flows hitting a record, the overall equity market penetration still remains in single digits. As smartphone penetration and media consumption in the small towns grow, this is a huge addressable market for influencers. “Earlier people had to rely on news magazines or business channels for content,” said Sundar. “Now, because of the phenomenal growth of platforms like YouTube, Facebook and Twitter, a lot of people have got opportunities to be content creators and content receivers.”

Finfluencers like Lendwe, Kamra and Ladha largely have content in Hindi. But, there is huge potential in other regional languages, too. Sharique Samsudheen, who does YouTube videos on the stock market and personal finance in Malayalam, has over 8.9 lakh subscribers.

Sundar plans to start a Tamil language channel in a few months; there have been many requests for the same, he said. Lendwe also expects traction for vernacular medium content in the next few years. He is currently setting up a team and plans to hire anchors to start YouTube channels in different languages, especially targeting people who do not understand Hindi.

Ranade says there is a huge scope for generating financial education aimed at kids. “My third standard kid said that ‘When I keep money in banks, they are providing a service; so why shouldn’t we pay them to keep our money safe, rather than them paying us’,” said Ranade. “I realised that children do understand a lot. So, finance for kids is a dream project. This will be a long-term project, but I do feel that there is a need for such content targeting children, too.”

While many finfluencers are providing great content, there is a flip side. “Some of the influencers are honest and are doing it for a purely educational purpose,” said Bhuvanesh. “But, the garbage is 100 times the decent content out there.”

Also, many influencers are not licenced as financial advisers. Lendwe, for instance, clearly mentions that his videos are based on the knowledge he gathers. Furthermore, investment goals and horizons will depend on each individual. This is a big road block for YouTube influencers as many of them give generic information.

K.S. Rao, head, investor education and distribution development, Aditya Birla Sun Life AMC, said that while finfluencers were helping improve the learning curve of investors, there should be regulation in the space. “If I have one lakh followers, a statement I make will have an impact the next morning,” he said. “If the statement is motivated, then it could be dangerous for people who are following me.” So, while finfluencers play a big role in investor awareness and education, financial planners or advisers will remain key.