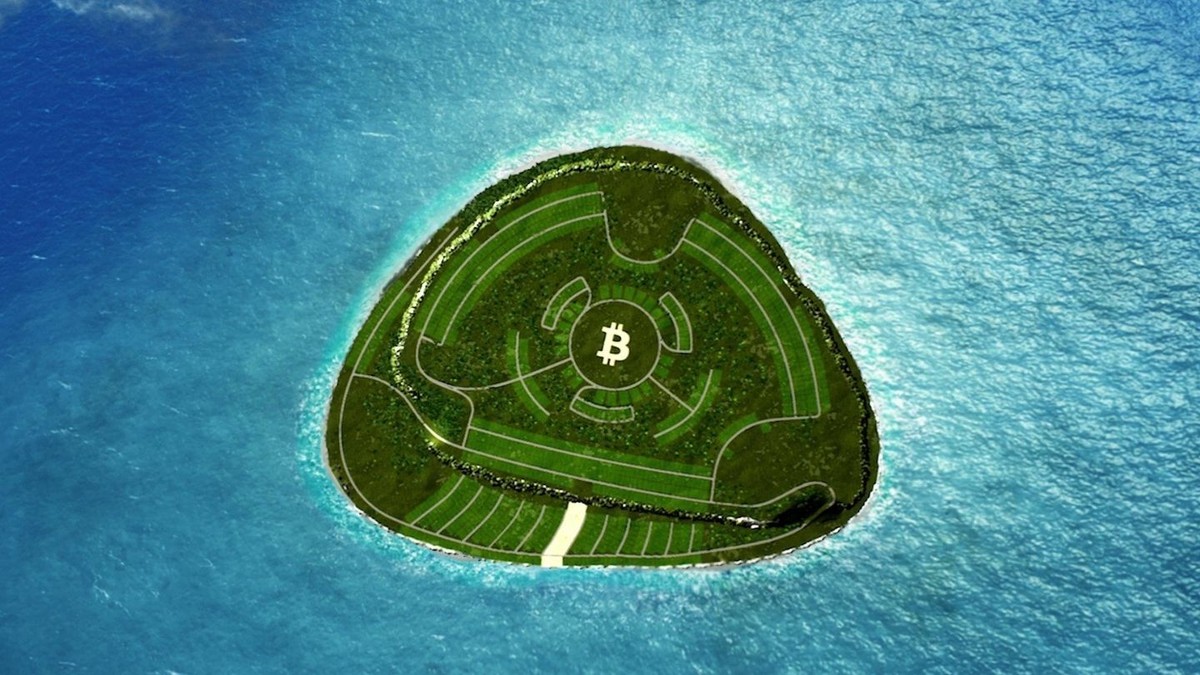 For as long as cryptocurrencies have existed, libertarians have dreamed of using them to create communities, seasteads, and cities free from the prying eyes of the state and its tax collectors. We’ve seen crypto-inspired attempts to claim disputed lands as tax havens, use UFOs and fireworks to christen a new tax-free Bitcoin town, build cities with DAOs, and establish communities inside of U.S. colonies to avoid taxes. But there’s now a wave of attempts to buy entire islands and build the next crypto “paradise.”

The first one to look at is “Cryptoland,” founded by Max Oliver and Helena Lopez, who reportedly have a checkered history with the Spanish YouTuber community mired in allegations of doxxing and the resulting boycott of an awards show linked to the pair. Cryptoland burrowed into the public’s mind when its unlisted 18-minute animated sales pitch was found on YouTube in December. It features three sections littered with bombastic rhetoric about what is to come, a manifesto of sorts, a memorial to Bitconnect—arguably the most infamous scam in Bitcoin history—and promises to “make crypto enrich a harmonious co-existence with the world energy of its surroundings.”

Since going viral, Cryptoland has taken down its unlisted sales pitch but a shorter public version is still available to behold.

The first section is a minute-long introduction to Cryptoland as a “paradise made by crypto enthusiasts for crypto enthusiasts” and its three proposed main areas: Cryptoland Bay, House of DAO, and the Blockchain Hills. The Bay can be best thought of as a massive theme park for any and every meme that has ever existed that is related to crypto—the video promises it’ll include a beach, resort, “working hub,” and more. The DAO promises to be a startup village that will incubate the future of blockchain technology. The Hills will be the “crown jewel” as an exclusive residential area that you can only access if you purchase a one-acre parcel of land available as an NFT.

The video continues with a 10-minute long animation that is best described as an unhinged fever dream driven by a talking Bitcoin tour guide, a miserable amount of crypto jokes every step of the way, a strange dance number, and more. It’s a full-on suffocation by blockchain meme; the toilets on the island are called “SHITCOIN” and the toilet paper is made of dollar bills and labelled “WIPE PAPERRR” (which, for the blissfully uninitiated, is a tortured play on the term “white paper” and the stimulus meme “money printer go brrrr”).

It’s hard to also overstate how important the creators of Cryptoland see this widely-mocked video as being to their mission.

“We quickly realized that it was practically impossible to convey this all with a PDF or something because it’s so abstract,” Oliver says in the video. “You have to see it rather than read it like the lambos, the Bitconnect scam memorial, the Crypto Kitties, things that we know people will get it if they see it. So after a lot of brainstorming we came up with the idea of creating a 3D animation video. The film had to be awesome but also very accurate at the same time because we must be sure we can deliver.”

As The Next Web pointed out in its dive into the island and Wikipedia editor Molly White in a Twitter thread sharing her research into the project, there are a few problems that stick out even beyond Cryptoland’s wild marketing video. Take the fact that the island mentioned in its “Why Paper”—an island in Fiji named Nananu-i-cake— is still for sale on at least two websites, despite the project’s website claiming that it has secured an “island purchase agreement.”  And then there’s the island’s small size compared to the grandiose plans: it’s just 600 acres, or less than one square mile. Or eyebrow-raising tweets: when one Twitter user asked Cryptoland what the age of consent would be, Cryptoland’s Twitter account replied “Mental maturity should be more than enough! ;)”

A dance number celebrating all the island has to offer | Screenshot

“We have been victims of what seems to be a planned attack to harass, vilify and twist our work,” Cryptoland said in a statement responding to the waves of criticism after the presentation went viral. “We condemn all the false information and false accusations being spread about Cryptoland and invite those who are truly interested, to make their own research and politely ask us if they want to know anything about this amazing project.”

Cryptoland did not respond to Motherboard’s request for comment.

Cryptoland isn’t alone. Satoshi Island is another crypto utopia supposedly in the works, featuring a 32 million square foot island (approx 1.1 square miles) in Vanuatu—an archipelago of islands between Australia and Fiji. It’s slightly larger than Cryptoland, but has substantially less information available on it.

Its website states that the island is owned by Satoshi Island Limited, but there’s no information on who runs the company or how beyond a Team section listing some individuals involved. It also claims to have “a green light from the Vanuatu Ministry Of Finance and all approvals in place.” Motherboard reached out to various Vanuatu offices to confirm this, but has not heard back. Satoshi Island told Motherboard they have owned the island for some years, but when asked about the company’s ownership said “Some of the public team and advisors have legal control of the company” and pointed at the Team section.

Running the “master planning and development process” is James Law Cybertecture, a Hong Kong architecture firm animated by the belief that “our work can alleviate suffering for all segments of society.” While the founders and main backers are obscured, Law is held up as one of the public faces in press releases and on the site which promises to design the island according to his vision.

“Modular development is the future of city building, instead of decades they will be completed within a few short years,” reads one quote from Law prominently emblazoned across a website. What does that mean? Well Law’s designs feature modular units that can be “combined and placed into hundreds of positions to create unique homes, apartments, amenities and offices.” Imagine see-through shipping containers with softer edges.

To help pay for this, there will be two types of NFTs that, similar to Cryptoland, are not yet available: Citizenship and Land NFTs. The Citizenship section’s first words are a disclaimer warning “Satoshi Island Citizenship NFTs have no relation to citizenship of Vanuatu.” 21,000 Citizenship NFTs will be minted with the first edition granted via airdrop to early investors, the project says, and Citizenship NFTs automatically whitelist the owner for early access to future NFT mints and airdrops, such as Land NFTs. They’ll also be the first allowed on the island and gain access to “advanced NFT security features” that establish beneficiaries if wallet access is lost and trustees meant to halt unauthorized transactions by enlisting wallet addresses as co-signers. Citizenship NFTs will also grant voting rights: In a weird blend of Athenian democracy and universal suffrage, each wallet can only have one Citizenship NFT which grants one vote. “One NFT. One vote,” the site proudly declares.

This brings us to Land NFTs, which are distinct from Citizenship NFTs. Satoshi Island told Motherboard that it will split each of its 2,100 lots of land into10 individual NFTs, for a grand total of 21,000 NFTs split across 7 collections. The first collection—the South Wing Land collection—will comprise 5,620 individual NFTs and is supposed to launch sometime in January or February. A recent press release hints at a process by which they can convert into a Non Fungible Property Token (NFPT) at which point the holder will need the island’s help to convert this NFPT into a traditional deed logged on Vanuatu’s land registry.

It’s important to note that, for both islands, almost none of this exists yet. It’s not clear if any of it will ever exist, as the details offered are not only relatively scant and nebulous, but it’s not clear if it’s possible even if tens of millions are not raised through NFTs and other means. And, given that Cryptoland and Satoshi Island are just two examples of a growing trend, it’s starting to look like bespoke crypto-utopias are another bubble within a bubble.