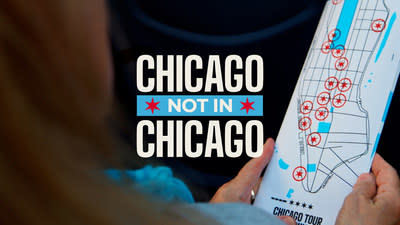 CHICAGO, Jan. 31, 2022 /PRNewswire/ — Mayor Lori E. Lightfoot today announced the launch of the “Chicago Not in Chicago“ campaign to show how Chicago has inspired so many other iconic cities around the world. This will be the first “local campaign” from a major metropolitan world-class city.

“Chicago is truly a trailblazing city of firsts.”

“Chicago is truly a trailblazing city of firsts. We were the first city to ever have a skyscraper, we’re home to house and blues music, and even the first cellphone was created here,” said Chicago Mayor Lori Lightfoot. “This campaign will share our story of ingenuity that has inspired so many across the globe and reaffirm our place as one of the greatest cities in the world.”

“Chicago Not in Chicago” is the latest of a series of activations and programming organized through “Chicago. City of Stories.,” Chicago’s Masterbrand. The Masterbrand aims to change the brand perception of Chicago, bolster resident pride, and attract new residents, businesses, and tourists. The Recovery Task Force, with its published report in Fall of 2020, identified the launch of a city Masterbrand as a critical ingredient to help the City’s equitable recovery across all 77 neighborhoods.

The “Chicago Not in Chicago” campaign will include national advertisements in newspapers and magazines, and a content video series illustrating Chicago’s influence in other major global cities – like London, Berlin, Tokyo or Sao Paolo. The first episode, which launched today, features a guided tour on a double decker bus in Manhattan to showcase the influence Chicago had across many landmarks in New York City.

“Many of the most iconic New York buildings were built by Chicago architecture firms, like the Flatiron Building and One World Tower,” said City of Chicago’s Chief Marketing Officer and President & CEO of World Business Chicago Michael Fassnacht. “Also, New Yorkers always have a cup of coffee in their hands, thanks to Chicago where the coffeemaker was created in 1930.”

The campaign’s premise is that every city has a Chicago story. From Blues, Gospel and House music, to skyscrapers, and so much more. This unique eye-catching campaign aims to inspire new ways we can all discover significant contributions we enjoy around the world that would not be possible without Chicago first, trailblazing and leading the way.

Aside from the content captured around the guided tour in New York City, the campaign also offers a platform where people can go and discover different interesting facts about Chicago, see how it influenced other cities of the world or even book a trip to visit it. While the first episode was captured in New York City, a London tour is scheduled to happen later this year.

“Chicago Not in Chicago” was developed by EnergyBBDO who worked with the City of Chicago to bring the idea to life. EnergyBBDO is part of the Mayor’s By Chicago, For Chicago initiative – a commitment to dedicate a percentage of all hours worked towards non-profit, social and cultural organizations and City agencies.

Learn more about the campaign by visiting www.chicagonotinchicago.com which features stories of different cities around the world that were influenced by Chicago. You can experience the full tour online or book a ticket to Chicago and discover its stories by yourself.

About Energy BBDO
Energy BBDO is a leading-edge creative organization energizing people and brands. Based in Chicago, it’s a subsidiary of the BBDO Worldwide Network. Every day, BBDO people in 81 countries work job by job and client by client to create and deliver the world’s most compelling commercial content. BBDO is part of Omnicom Group Inc. (NYSE-OMC) (www.omnicomgroup.com).