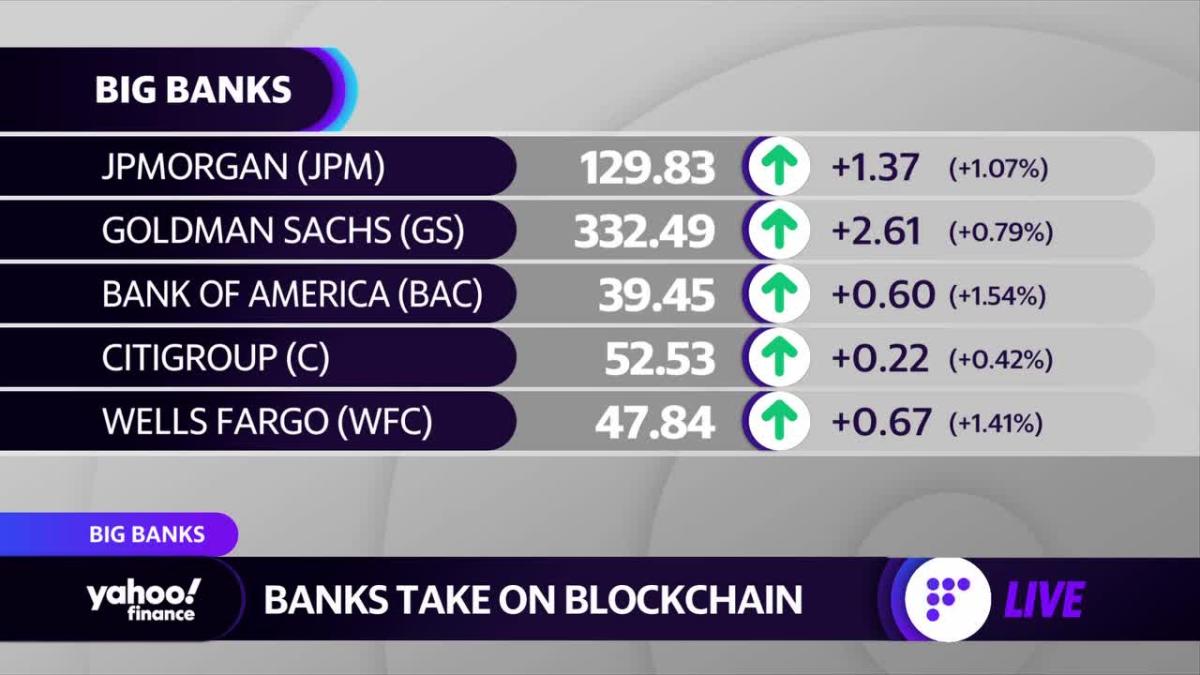 Yahoo Finance’s Alexandra Semenova joins the Live show to discuss how bank CEOs are addressing the growing demand for blockchain.

– All right. You may have missed something in the latest crop of earnings from the big banks. That is a major push into the blockchain. Yahoo Finance’s Alexandra Semenova has more on this. Alexandra, walk us through it.

ALEXANDRA SEMENOVA: Well guys, first of all, it’s so good to be back in the studio–

ALEXANDRA SEMENOVA: –with you guys, just in time for earnings season. And speaking of earnings, we just saw the big banks cap reporting for the first quarter. Some of the big themes were talks about inflation and how that weighs on the economic outlook. They were also talking about the war in Ukraine and that weighing on dealmaking activities.

So amid all of that, something that got lost is that a lot of these big names on Wall Street were name dropping blockchain technology in their earnings results, which is very unusual for these big financial institutions who not long ago would shudder at the idea of crypto or blockchain. The CEOs of BlackRock. Goldman Sachs, and JPMorgan all mentioned that they were scaling up plans around digital assets. So you had Goldman Sachs CEO David Solomon mentioning during a call last week that they expect that crypto and blockchain will cause significant disruption in the way that money moves around the world, which is a big, bold statement there on crypto from Goldman.

BlackRock’s Larry Fink who once called Bitcoin a money laundering scheme is also changing his tone. He said that, “BlackRock is studying digital assets and their associated ecosystem, including crypto assets.” And Jamie Dimon during JP Morgan’s earnings call briefly said that the bank was building out some blockchain type things without getting into more detail on that. But it’ll be interesting to see what they do. We’re going to hear more details in their investor day next month.

– Do we know sort of wh– as you said, for a long time, the banks had a different tone on this. Do we know what changed to make them create this sudden interest for them in blockchain?

ALEXANDRA SEMENOVA: Well it’s still very much in the early stages for institutional investors. But one thing that they kept bringing up was client demand. So it’s kind of forcing their hand on this, and they have no choice but to foray into digital assets and capitalize on some of those opportunities that are out there. So interesting to see what they’ll do in the coming months and years with blockchain.

ALEXANDRA SEMENOVA: Good to see you as well.

– Or as they say In Real Life, IRL. Yeah, likewise.